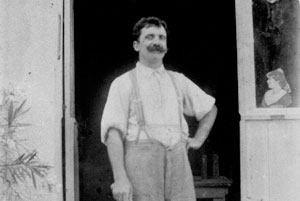 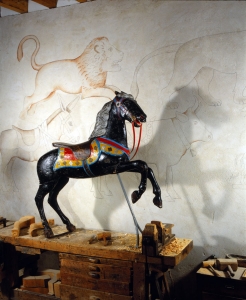 Alfred Chanson defined himself as “a carpenter in fair art.”

This man of the campaign was a wheelwright, blacksmith and wood turner first but the wonderful world of the carnival fascinated and attracted. He became sculptor of fairground art in the early 1900s in his workshop Seignelay, a multitude of animals born: donkeys, horses, pigs, cows … leave animate the rides.

In London, in 1982, the Carrousel Art magazine devotes its front page.

In 1986, we had the pleasure of discovering the workshop of Alfred Chanvin remained unchanged. We took pictures of the workshop with large drawings of animals on the walls. And we introduce our museum Laduz tools, shelves, wood lathes, but also established, drawings to paper tiles and patterns for the realization of its animals wood … Later there will assistants two horses, found in a junk dealer, and identified by their original plates.

We are always looking for his creations.


Excerpts from the catalog of the 1997 exhibition at the Museum of Folk Arts of Laduz: “Art Forain in Yonne, in homage to Alfred Chanvin.”

… “If the period of 1880-1914 is considered the golden age of fairground art, she is the first architects of the leisure civilization which gave proof of a real inventive genius, a eccentricity and poetry, in short, an art amaze the public that the extreme mechanization and mass production had not stifled. Contradicting the city bustle, isolated in his small workshop in Seignelay, A. Chanvin, is something so marginal sculptor … ”

… “Under the leadership of Zeev Gourarrier, curator at the Museum of Popular Arts and Traditions, the heritage aspect of Art Forain is now considered …” * François Marchal was with his wife Fabienne, a great collector of fairground art.

… “With the funds Chanvin, an exhibition is organized by the sculptor Popular Arts Museum Laduz, a first step in the knowledge of a craftsman Art showman and its manufacturing techniques born.” Jean- Favand Paul, Founder of the Museum of Arts fairground. Paris-Bercy.

* The National Museum of ATP (Arts and Popular Traditions) of Paris has been closed since 2005. Its major collections are transferred and placed in reserve in Marseille. The MUCEM (which was to host the collections) is essentially turned towards the two shores of the Mediterranean and has a different orientation.